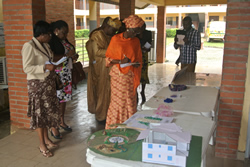 The school started initially as a Nursery School in 1967 in a pre-fabricated wooden classroom with 10 children. With a loan from the university, a temporary building was constructed which housed the school for ten successive years. In 1977, the Nursery school celebrated its tenth anniversary by starting the building of the permanent structure.

On May 9, 1981, the permanent building with 12 double Decker classrooms and an administrative block was officially opened for used. The history of the University of Lagos Women Society Nursery/Primary School is a review of years of dedication, handwork, foresight and strong will.

The Nursery school was originally a two-year programme, admitting children from age three into the nursery classes, and taken them on to their Kindergarten classes soon after they are four years old. At the age of five, most children leave the U.LW.S Nursery school to join various primary schools. 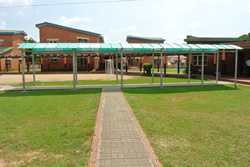 The goal of the “Play Group” is to stimulate and support the mental, social, emotional and physical development of the child by providing opportunity for spontaneous and structured play in a secure and loving environment.

In the year 2002, after 35 years of running the nursery school the noble idea of expanding the Nursery school to absorb pupils for primary education was initiated by the president of the Women Society, Mrs. Olusola Ibidapo-Obe. This idea was welcomed and a committee was subsequently set up to look into the modalities of building the Primary School.

On the twenty-first of October year two thousand and two, (21-10-02) the primary school was founded to the glory of the Almighty God.

The school occupied these spaces and more for almost three years before moving to the permanent site. 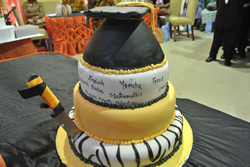 We would like to put on record here the great assistance and support from Professor Ibidapo – Obe, the vice chancellor of the University of Lagos. He threw his whole weight behind the women society in this project. He contributed in no small measure to the primary school project. He chaired so many launching programmes and donated generously.

When the woman society applied for a place for the school’s permanent site, the society was promptly given through his influence.

Today, the University of Lagos Women Society Nursery/ Primary School has grown in leaps and bounds and caters for crèche, Nursery and Primary Education.

The University of Lagos Women Society Nursery/Primary School is run by a Board of Governors and the chairmanship of the president of the University of Lagos Women Society. The board is responsible for policy formulation and general management of the school, while the headmistress is responsible for implementing the education policy and the day to day running of the school.

The school operates a broad, balanced and interesting curriculum including the requirements of the National Curriculum for Nursery and Primary School. The school encourages children to develop at their own rate and achieve their full potential. The curriculum aims to develop a total child.

Since life itself is a continuum and dynamic and nothing actually is static, a great number of changes/innovations have taken place in the area of curriculum, teachers’ professional development and extra curricular activities. The staff attends workshops and undergo training to upgrade their status and improve their teaching efficiency. Phonics has come alive in the Nursery and the Primary School, pupils in addition to the constructivist teaching approach for understanding and application; enjoy extra curricular club activities like Ballet, Music, football, Taekwondo, Karate, Red Cross, Brownie, Swimming, Cub Scout, Creative Art, Life Savers, Children’s Theatre, Readers and Writers, French Club and  Indoor games.

PROSPECT FOR THE FUTURE

Since the Primary School experience is the foundation of later success or failure in intellectual endeavors, the school hopes to establish a culture of continuous excellence in cognitive, effective and psychomotor domain. Hence, each child is motivated to develop to his/her fullest potential through well-planed educational experiences. It is hoped that in this way the child is positioned to be a relevant individual to his society, nation and the whole world.

Connect with us on social media